When is the best time to take a Airboat Tour

When is the Best time, Airboat Tours are a year round escape into the Everglades, remember we are a semi sub tropical Paradise, Warm to very Mild winters and Warm to very wet and Humid summers.
We conduct our tours from 8 am till 5 pm every day except Sundays from 12 pm to 5 pm and are closed on Christmas Day.
Anytime Winter, Spring, Summer or Fall is a great time to visit the Creatures of the Swamp.
Although Summer Months from June through September are our wettest Months, It is best to Book your Tour early, say from 8:00 am to 2:00 pm,usually will mean you will not be rained out.
Our Summer rains are warm and our Airboats have Binimin Tops and we do supply rain gear for everyone.
Remember our wildlife loves the warm summer rains,
You can not visit florida and miss the opportunity to see the vast Everglades on a State of the Air Airboat.
Make your reservation and join us

Our Grandson Cannon Claycomb, was invited to Scotland the week of 5/23 through 5/30/2013 to compete in US Kids European Championship.
We are very proud of Cannon and his achievement.
Jim and Angela Passmore
Kissimmee Florida
Canon Claycomb, son of Jason & Ericah Claycomb, recently competed in the US Kids European Golf Championship. The event consisted of the world’s best young golfers ages 5-18. The tournament was contested in East Lothian, Scotland and played on historic courses such as; Gullane, Craigielaw, Luffness New and Longniddry. Approximately 550 players from 35 nations competed in Europe’s premier junior golf tournament to showcase the next generation of stars. Canon qualified for this prestigious event through local and regional tournaments throughout the United States.

Canon finished in 10th place for his age group with rounds of 79,72,77. His second of 72 was highlighted by a 6-hole stretch where Canon went birdie, eagle, birdie, par, birdie, birdie (6-under). Canon's strong performance landed him an alternate position on the Van Horn Cup Team, which consists of the top two Western European and top two International players from each age group among Boys 10 and older and Girls 11 and older.

On behalf of The Club at Olde Stone, please join us in congratulating Canon and the Claycomb family on this wonderful achievement in his golfing career. We look forward to seeing the "Claycomb" name atop many leaderboards for years to come.

Amazing things Happen in the Swamps

I had just received a call from Captain Bill who had returned from his last tour of the day into the Everglades , asking if I could join him at the dock, Since it was on my way I decided to make a stop and see what he had to say.
As I left the vehicle, I heard Bill say - you won't believe my last trip, So knowing Bill from the hill's of Tennessee, I knew this was going to take some time, and I made my way to the nearest shade tree.

Bill; I was out in the backwaters and decided to make my way to the flooded Pastures.
This being early summer., I thought about the low water associated with draw down for summer rains;
Bill; You know how shallow the plains get this time of the year, but there are always some interested thing to see in the afternoon
I too had been on some of the outing that Bill was a talking about, and from one day to the next, you can always get to see something different

Bill; I had left the female Susie with her 20 some grunts all in the bull rush at the north side of the marsh, she had put on a show for the 5 guest that were from England, with her Hissing and a blowing.
Ms Susie has been one of several female's that has built nest and hatched out several grunts / short for newborn gators

Bill; I left Ms Susie and headed down the trail that led to the back flooded area, with several crain , ibes, herons and a wood stork voicing their concerns, and decided to stop at a new Sand Hill Crain nest , to see if she had laid her eggs

April May & June are times when a lot of wildlife build their nest in the Marsh, great time to watch the little ones come forth

Bill; This one had built in some higher swamp  grass close to the trail into the flooded plains,
we were sitting there discussing the migration and what the Crain chicks look like when they hatch. When out of the corner of my left eye, I saw the Tall Grass moving with some force

Now this is where it will get interested, because Bill expression on his face lit up. So now he has my  attention

Bill; I told everyone to look to the left cause something big was a coming our way and moving fast, about that time a Large Black Boar probably 400 lbs came a crashing thru the thick swamp grass, headed our way.
This was a getting better and better

Bill ; I said hold on and hit the starter and away we went, the same direction the Boar was a coming at us, cause I knew sure he would turn if I came his way, and sure enough he did," phew"

Bill; the Boar took off in the other direction and I was in pursuit, hot on his tail as he went left and then right trying to loose me.
They can run fast in a short 1/4 mile

Bill; Finally he had had enough and just sit down on his behind and looked at us, there was a lot of Whoop's and picture taking and we bid him farewell
One of the ladies say's that was the most fun I have ever had, and she said I laughed so hard I think wet myself
we all had another laugh and headed to the dock

Posted by Captain Jim Passmore at 2:18 PM No comments: 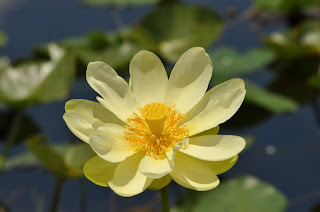 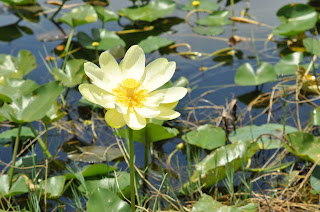 Let me Introduce everyone to the World of the Lotus, Discovered in India over 2500 years ago and then reported in China over 2000 years ago.
In those countries the are pink and white, here in Florida and some other southern states they are Yellow.
The Lotus is one the highlights of the Marsh, here in the Everglades from mid May through late Summer, we have the privilege to enjoy the beauty as well as the nutrition value of the plant.

The lotus can be harvested - using the roots for pickeling, crush into a powder for several use in casserols, soups, pastry, The stem is used in stir fry' and baked goods
The Bud is used in Salads and the Pod, once matured produces a seed pod that is one of the most Heart Healthy nuts used today. The dried pod is also used in flower  arrangements.

You will enjoy the beauty of the marsh aboard one of our airboats and you may even enjoy some swamp snacks, ask your captain

June always as expected bring the warmer weather, and longer days for outdoor activities.
Each year we turn back our clocks and start a little earlier for those who enjoy getting out and about before the heat of the day. ( we start at 8:00 am)
We also bring out our Bimini tops to help reflect the beautiful yet warm feeling of the Sun.
Most Europeans are here to enjoy our Sunny days, especially after a long and cloudy winter.
and our thoughts are we don't want them to get too hot and scorch that beautiful skin.
So it is that time, as we bring out the tops and assemble them to the right boats, for a beautiful summer out in the everglades, aboard an Orlando airboat tour. 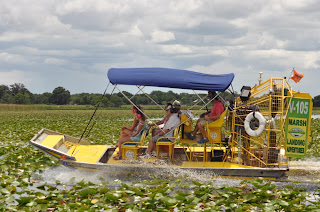 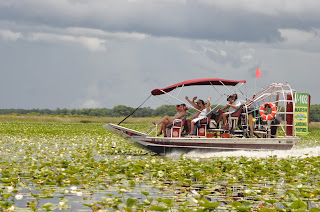 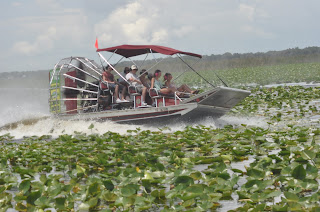 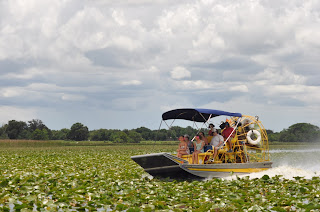 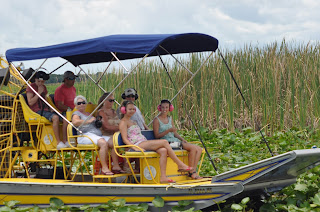 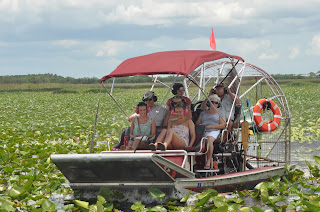 Recycle and decorate your lawn. 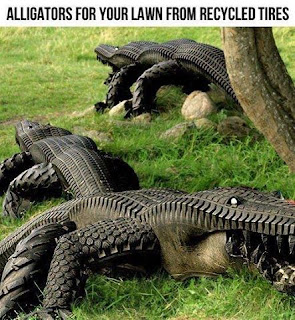 Promote Your Page Too

Captain Jim Passmore
Enjoy the outdoors - own and operate Orlando Fishing Guide Directory. A complete fishing guide service for both Saltwater and Freshwater Angeling Trips Own and operate A Orlando Airboat Eco Tours. introducing clients to the beautiful outdoors as well as educating thru narrated tours about the preservation of our endangered and protected habitat that call Florida their home